If you love to sing, join the award-winning VIVA! Women’s Choir

VIVA! started life in 2006 at Dorchester Arts Centre as a mixed choir. Now, with a membership of around 60 women VIVA! has well and truly established itself as an outstanding Dorset women’s choir. We sing an eclectic mix of songs, including Gospel, folk, world music, pop songs old and new and original pieces composed for special events

VIVA! performs regularly at local events, such as the Dorset Women’s Day Festival and Race for Life, regularly raising funds for local and national charities. In 2018 VIVA! raised hundreds of pounds for Homestart West Dorset, Parkinson’s UK, and the Citizen’s Advice Bureau. VIVA! teams up with Kathie’s other choirs (Heart and Soul, Dorset County Hospital Choir, Skylarks Children’s Choir and Nightingales Middle School Choir) at least twice a year. The highlight of our year is our Christmas charity concert, which is always packed to the rafters! 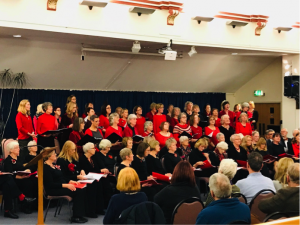 VIVA! sing with Heart & Soul at the Christmas concert 2018 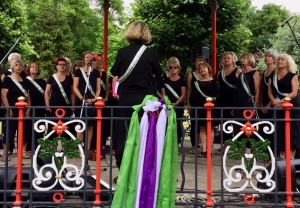 VIVA! sing at the Celebration of 100 Years of Voting Rights for Women at the Borough Gardens in 2018

The adult choirs have won the Best Large Choir category at the Weymouth Festival on a number of occasions over the past few years. In 2015, the adjudicator commented that “Give Me a Clean Heart built into a rich harmonic experience. The commitment of every member of the choir brought a real intensity to the performance”. Regarding Amazing Grace, he added that “The colour of the long notes was carried on beautiful open vowels. The performance had joyful expressive energy!”

In 2012 VIVA! joined forces with other Dorset choirs to sing music specially commissioned for the opening of the Olympics in Weymouth. They also featured that year on the soundtrack of Out in the Open, an original film about homelessness which premiered at Dorchester’s l Plaza Cinema.

In 2014 VIVA! combined its talents with those of Skylarks Children’s Choir and Shaftsbury’s Pallida Choir, directed by composer Karen Wimhurst. The choirs took part in Heartwood, a very special outdoor performance conceived by sound artist Adrian Newton, as part of Dorset’s Inside Out Festival.

Singing with VIVA! is informal, fun and a great way to relax and de-stress. VIVA! welcomes new members at any point in the year. No prior experience of singing is necessary and you don’t need to be able to read music. VIVA! thrives on its laid-back, inclusive and friendly atmosphere (we’re a very sociable bunch and arrange regular meals out) so come and join us and experience the joy of making music together!

The basic workshop fee is £7 per session when paid in a half-termly block (i.e. £35 for a half-term of 5 sessions, but variable depending on the number of weeks in the half term), or £8 per session for ‘pay-as-you-go’. Concessions fee (for those unemployed or in receipt of working tax or pension credits) is £4.50 per session, also paid half-termly. You can pay by cheque or direct bank transfer online.

VIVA! meets on Thursday evenings during term time at Stratton Village Hall, from 7.15-8.30pm. Why not join us for a free taster session?
For more details please contact Kathie on 07826 385301 or singing@kathieprincemusic.co.uk

(Above) VIVA! sing One Voice during a recording session at Warmwell Church

Click above to hear VIVA! singing Give me a Clean Heart

…The Storm is Passing Over 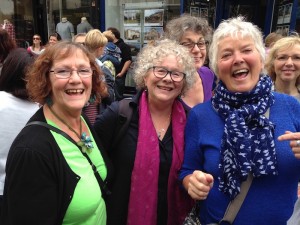